Hide and Go Seek The Eggs 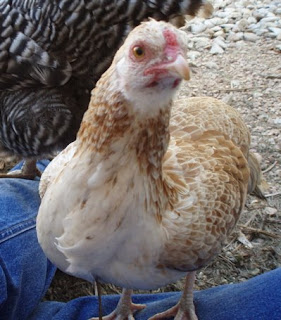 Each time I'd find her clutch of eggs (outside and away from the nest boxes, natch) Cinnamon would find a new site. Her first nest (#1) was underneath one of the spiky plants on the hill. Then it moved to (#2) beneath the rosemary bushes, then (#3) behind a regular bush, (#4) over to another spiky plant on the opposite side of the porch stairs from the bush, then (#5) around the corner next to the fireplace chimney. It had now been a couple of weeks since I'd seen any of her eggs - coop or in the other spots - so I knew she had to be laying them in a new spot somewhere. 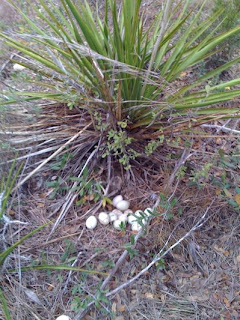 Finally, yesterday: the latest nest was found, same hill as her first spot, but under a different spiky plant. Had to hack and slash through the trees and brush to get to the area, but of course, that's what made the spot desirable in the first place, right? Safe from casual doggie blundering, too. How many eggs? Sixteen, count'em, SIXTEEN eggs all in one spot. Not all of them were Cinnamon's, either. My mistake, and the reason why she kept moving the clutch site? I kept taking ALL the eggs (yes, I'm a little slow, but finally figured it out). Cinnamon may have been bred in a hatchery, but she'd kept enough instincts in her little birdy noggin to figure out when a place wasn't "safe" to lay anymore. This time, I left a couple of the eggs in place to see what would happen. She laid another egg in the same spot later that day. Ha!

[Dang, how sad is it that I feel proud about outwitting a chicken?] 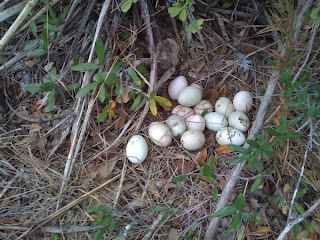 A week ago, I purchased decoy eggs from an antique stall - was surprised to find them cheaper there than at the feed store. Anyhow, replaced the few remaining fresh eggs in the latest nesting spot with one of the decoys. Please oh PLEASE let this be okay with Cinnamon, and that she'll continue laying in the same spot...